Christina Motta was born in São Paulo in 1944.

She began to be interested in sculpture at 13 years of age. However, she devoted herself entirely to that art after a trip to London in 1970, where she ended up living for 21 years.

There, she met, and was greatly influenced by the well known sculptor Karen Jonzen, with whom she worked for several years.

In 1978, she began to participate in exhibitions in London, among others by Alwin Gallery in the company of renowned English sculptors such as Henry Moore, Lynn Chadwick and Barbara Hepworth. Later on she also participated in several exhibitions in Holland.

In 1992, Christina returned to Brazil. Since then it was there that the sculptor created the first of many public sculptures, as that of the of the French actress Brigitte Bardot.

In Búzios, one can also find the sculpture of the three fishermen drawing a net by the sea. In 2015 this work was selected by an international site as "One of the 26 most beautiful sculptures of the world” in the category of sculptures related to the history of their own city.

At present, she has sculptures in public spaces in several states of the country. Perhaps, one of the best known is that of the composer Tom Jobim, on Ipanema Beach, in Rio de Janeiro.

In 2003, an article published in the art magazine “Ventura” among other things, had this to say about her work:

“…Here is when Christina shows up, transferring to her sculptures not only the beauty of the long gone times but also the sweet enchantment of every moment dedicated to each of her pieces. Her works, exhibited in Brazil, England, Holland, United States and Japan, have the mark of her time and curiously, the mark of times and personalities.

In down town Rio or in the city of Búzios or in São Paulo, Christina’s sculptures offer to circumstantial observers an natural and close rapport with Brigitte Bardot, an unknown passer-by with his umbrella or with three fishermen at Búzios sundown.

In her images of children,(of all ages) it is impossible for each of us not to return to the happy times of our childhood, like a sparkling visit to the memory of an old friend. Presenting in her works, delicate moments of ecstasies and reflection, Christina Motta deserves the compliment of all those that, in a direct or indirect way became a part of her world." 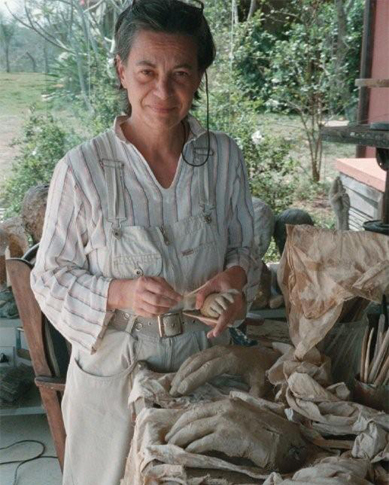